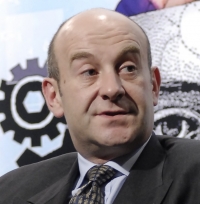 Digital Ship is sad to report that Patrick Slesinger, former director and CIO of Wallem Ship Management and one of the most respected figures in the maritime IT industry, has died.

Mr Slesinger died of a heart attack on Sunday, October 27th 2013. A funeral was held in Hong Kong on November 5th.

Digital Ship and many across the industry will remember Patrick for his passion and dedication to improving operations through the use of technology, and his intense focus on delivering value through the application of these tools - figuring out what works and what doesn't, and how to apply this knowledge for the benefit of the company.

A consummate professional, senior ship management executive and IT innovator, Patrick possessed a rare quality of combining the commercial and operational reality of management of fleets of vessels with the ability to move them forward technically to deliver ‘right sized’ solutions.

While many around him over the course of his career were side-tracked by the hype of the dot com era, or new software tools and satellite communications options, Patrick would implore colleagues to ignore the rhetoric and search for the return that would make investing in these systems worthwhile.

Patrick understood that a range of benefits could be derived from more expensive technologies if the results justified the investment - as he memorably remarked in one particular presentation, he would happily buy all of his staff Montblanc pens to write with if they could demonstrate how it would create more value than using a ballpoint Bic.

Patrick served at Wallem Shipmanagement for 18 years, as CIO / Group IT manager from December 1992 to October 2011. He also acted as managing director of Wallem Innovative Solutions, an IT development and offshoring service provider.

Among the many accolades he received during his time with the company was the CIO Asia Award, awarded to him by MIS Asia magazine in 2008. Patrick left Wallem in 2011 to work as an independent consultant to the maritime industry in change management and process management.

Patrick has been a true friend and staunch supporter of Digital Ship for more than a decade, having sat for one of the first ever interviews carried in the magazine soon after this company started in 2000.

Patrick was instrumental in the inauguration of Digital Ship's first ever conference outside Europe, in Hong Kong in September 2001, chairing the first day session - and made keynote speeches at Digital Ship Hong Kong and Singapore events every year between 2004 and 2012 (with the exception of 2011 when he had just left Wallem).

Patrick will be dearly missed by Digital Ship and his many friends and admirers across the maritime IT sector, both for his friendship and for his expert knowledge in shipping technology matters. Digital Ship would like to extend our sympathies and condolences to his family at this time.