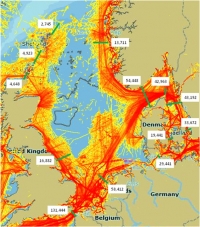 ACCSEAS, a project funded in part by the European Union, is developing e-navigation tools to help mariners navigate safely in the North Sea region, particularly in relation to the expected growth in wind farms in the sea area in the coming years.

ACCSEAS (Accessibility for Shipping, Efficiency Advantages and Sustainability) tested at a prototype resilient PNT system (Positioning, Navigation and Timing) integrated into the bridge of a vessel at the end of February, in Harwich, UK.

The demonstration aimed at highlighting GPS vulnerability to jamming and showing the benefits of having a resilient PNT solution.

In research published on February 26th, ACCSEAS calculated that navigable space in the North Sea region could decrease by 5.5 per cent as the surface allocated to wind farms could go from roughly 440km2 to about 23,500km2 “within just a few years.”

This would occur at a time when shipping traffic and vessel sizes are expected to rise, in a region that already hosts some of the busiest shipping lanes in the world.

“We believe that e-navigation technologies have the potential to reduce these risks through safer, more accurate navigation in order for turbines, other offshore obstacles, and ships to co-exist safely in the North Sea Region.”

“Greater navigational accuracy from e-navigation technologies will help lead to safer seas,” adds David Balston, director of safety and environment at the UK Chamber of Shipping.

The initiative will hold its first annual conference at the Flensburg University of Applied Sciences in Germany, March 5-7th.