The Multi-Function Universe is expanding 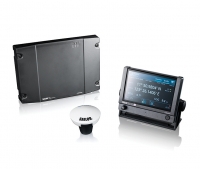 {mprestriction ids="1,2"}The touch-screen SAILOR 6004 Control Panel sits at the heart of the Multi-Function Universe, providing control for all products connected to it from a single device. The 656X GNSS and 657X DGNSS join the already available SAILOR 6391 Navtex and SAILOR 628X AIS as new generation products designed to work with the Control Panel.

All systems connected to the Control Panel can be controlled by selecting the icon for the product as you would an app on any touchscreen device, which provides access to set-up, functions and diagnostics.

“The Multi-Function Universe approach means that a variety of products can all be accessed from a single screen on the bridge and anywhere else a repeater is needed, making installation far more flexible than with traditional products that all require their own screen,” said Claus Hornbech, business manager, Cobham SATCOM.

“The approach also saves space on the bridge, and importantly, makes the life of maintenance engineers easier as they have a single point of entry to the network.”

Both the new GNSS and DGNSS systems collect satellite data from any available navigation satellites, including GPS and GLONASS, and distribute it to a variety of on board systems such as ECDIS , GMDSS, Integrated Navigation Systems and the onboard satcoms.