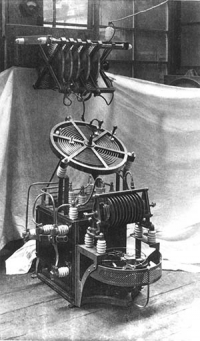 The Nippon Radio quenched spark radiotelegraph unit was manufactured in 1916

Japan Radio Company (JRC) has celebrated its 100-year anniversary, with the company passing the milestone in December 2015.

{mprestriction ids="1,2"}The company was founded as the Japan Radiotelegraph Manufacturing Company in December 1915, following the passing of the private radio law in Japan in June of the same year. Within its first year the company’s initial product was developed, a radiotelegraph unit which was installed on a rescue vessel.

It was not until the 1940s that the company changed its name to JRC, and today’s logo was also established, which is now 70 years old.

In 1953 JRC was listed on the Tokyo Stock Exchange, before the company got involved in the first generation of satellite communications terminals in the 1970s working with Marisat (today known as Inmarsat).

While the ‘R’ in JRC stands for ‘Radio’, the initial is probably better suited to ‘Radar’, with the company having sold close to 400,000 radar units over the course of its history.

To put this figure into perspective, JRC says that ever since Neil Armstrong set foot on the moon in 1969, it has sold 1 marine radar every hour up to the present day.