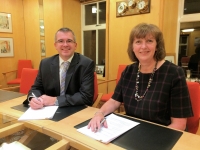 Transas has signed a contract with the Lerwick Port Authority to install a new Vessel Monitoring System (VMS) to cover Lerwick Harbour, in Shetland in the UK, replacing the Harbour’s existing system.

This set up will be installed across four sites covering the port’s area: the main port operations building and three remote stations at Rova Head, Maryfield and Kirkabister, monitoring the northern approaches, inner harbour and southern approaches respectively.

Transas will also provide operator training courses and a maintenance service plan under the agreement.

“The investment is another important step in our ongoing development programme which is adding to the port’s capacity and competitiveness.”

The project is set to cost around £450,000, including the Transas contract, telecommunications and civil works, and is scheduled to be fully completed and delivered by May 2016.{/mprestriction}