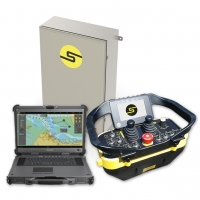 Sea Machines Robotics, a Boston-based developer of autonomous technology for marine vessels, reports that it has successfully completed product sea trials for an introductory line of intelligent command and control systems to automate elements of commercial vessel operations.

{mprestriction ids="1,2"}The two new products, SM300 and SM200, deliver onboard intelligence systems and remote control capabilities that can be integrated with existing ship systems, be they digital, analogue or mechanical, using communication interfaces developed by the company.

The system comes with a certified embedded ECDIS, and includes obstacle and traffic avoidance functionality. Remote communication with the SM300 is available via Wi-Fi, 4G and satellite, providing real-time data feeds to the remote operator.

The SM200 system is used to provide integrated line-of-sight and remote-vessel control, for collaborative vessel operations.

“This is the advanced technology that mariners have long been awaiting,” said Sea Machines’ CEO Michael Johnson.

“Our products allow operators and crew to focus on higher-value tasks while at sea, empowering a commercial vessel to do more with predictable results and lower operational costs.”

“Missions such as survey, fishing, dredging, surveillance and offshore energy support can now be executed productively around the clock and in extreme weather conditions, with improved crew safety and efficiency.”

The company has already been working with Maersk in organising sea trials of some of these technologies, on board one of Maersk’s newbuild Winter Palace ice-class container ships.{/mprestriction}