By Mr. Dana A. Goward, president of the Resilient Navigation and Timing Foundation.

A year-long study sponsored by the European Space Agency (ESA) says that the United Kingdom (UK) should create a “hybrid system” of positioning, navigation and timing (PNT) capability to ensure uninterrupted maritime commerce and protect its critical infrastructure. The 1,174 page report concludes that a combination of Global Navigation Satellite Systems (GNSS), eLoran, and the short range R-mode VDES, is needed for maritime navigation. These would also benefit other critical national infrastructures. It also recommends local positioning systems such as LOCATA for port operations.

As an island nation, the UK has a long maritime tradition. And maritime commerce is especially critical to its economy and wellbeing. The report says maritime navigation is also a particular concern for the UK as its waters are some of the busiest in the world. Transits approach 500,000 a year in some places. When windfarms, other uses of the waterspace, and emerging autonomous vessels are factored in, maritime navigation must become a no-fail proposition.

The Maritime Resilience and Integrity for Navigation (MarRINav) project is part of ESA’s NAVIS program investigating PNT systems, both terrestrial and space-based. Europe has long recognized that the weak signals from satellite navigation alone are inadequate for safety-of-life and other critical functions.

An overview of the project was presented recently in a webinar hosted by the Royal Institute of Navigation.

While MarRINav focused on UK maritime, the authors contend the methodology and much of its work can be used by any nation and across critical infrastructure. “Nations’ coastlines, commerce, infrastructure, and requirements are all different,” said Alan Grant, a Vice President of the Royal Institute of Navigation. “But part of the intent with the MarRINav effort was to create something that could be used for more than just the UK.”

Coordinated by the blue solutions firm NLA International, the project was a team effort by eight analytic, academic and non-profit entities. “No one on the team sells equipment or had any interest in the outcome other than getting the analysis right,” said Jonathan Turner, a co-founder at NLA International.

For example, user requirements were gathered and documented by the UK’s General Lighthouse Authority, continual engagement with users was led by the UK’s Knowledge Transfer Network, and a “next steps” plan was developed by Taylor Airey Limited.

London Economics performed a cost-benefit analysis that showed a return of 2.2 times on an investment in the systems to implement MarRINav’s recommendations. This was a very conservative analysis as it only considered benefits to container ship operations in ten UL ports. The total benefit to maritime commerce, other infrastructure, and the overall UK economy would be much greater.

Every effort was made by the project to consider all aspects of PNT in maritime commerce, including from the points of view of critical infrastructure, vessels, ports, pilots, and aids to navigation. All phases of operations were also considered from when a container is still on a truck, to when it is on an open ocean voyage, and back on a truck again. 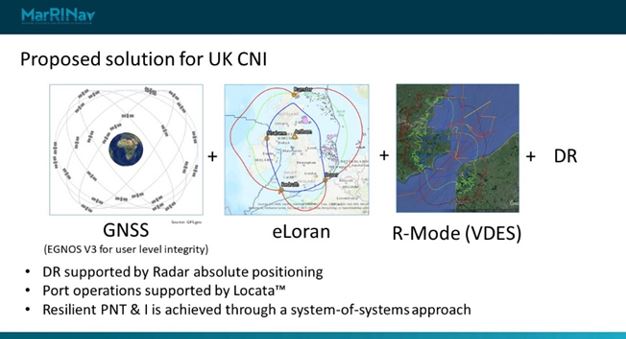 The project’s final systems architecture included GNSS, eLoran, and R-mode VDES. These would presumably be provided by the national government and available in almost all of the UK’s near and far coastal areas. The systems would be supplemented by LOCATA in ports for container operations, and aboard vessels by dead reckoning with radar ranging.

Earlier UK efforts examining the nation’s over reliance on GNSS suggested that eLoran and the commercial Satelles Timing and Location (STL) might be sufficient to meet the UK’s needs. While MarRINav considered STL, it was not included in the final recommended architecture. The authors devote several pages to discussion of the technology listing a variety of unknowns. They also indicate that STL equipment would likely have to be combined with inertial or other sensors and that it is “…unlikely that an STL component would be usable on its own.”

Archived video of the webinar is available here.

Mr. Dana A. Goward is president of the Resilient Navigation and Timing Foundation and a member of the US government’s Positioning, Navigation, and Timing Advisory Board.