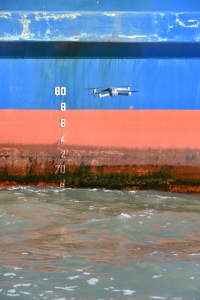 Naval architecture and marine engineering company Foreship has found that draught surveys employing drones improve the accuracy of readings as well as the speed and safety of the survey process. Following successful trials, Foreship has added the method to its service offering.

{mprestriction ids="1,2"} A draught survey is typically performed from a boat operated alongside the vessel. The boat, which may be a ship’s workboat or rescue boat, is lowered to the water where a surveyor can take readings using the markings painted on the ship’s hull. While this is a tried-and-tested process, it has disadvantages, said Markus Aarnio, chief naval architect, Foreship.

“The traditional way of taking draught readings is time-consuming, and there are always some risks when launching a manned boat from a vessel, such that it is best avoided when not absolutely necessary. Then there is the question of accuracy: it can be difficult for a surveyor to take precise measurements in waves, while the ship operator’s interest is for the process to be completed in as short a time as possible, for example.”

According to Mr Aarnio, these drawbacks were what inspired Foreship to seek a more advanced solution. “Drones are fast and highly manoeuvrable and can be controlled from a remote location. This eliminates the need for a survey boat, saving time and improving safety. The technology also allows greater accuracy, because even in choppy waters, the video footage captured by the drone allows us to determine the draught reading correctly.”

“Our application of drones in performing draught surveys represents a new and highly focused way of applying digital technology to provide better accuracy in surveys,” he said. “The procedure can be carried out at any port or shipyard where permission to operate drones can be obtained, and our positive early discussions with classification societies suggest that receiving class approval will not be an issue.” {/mprestriction}