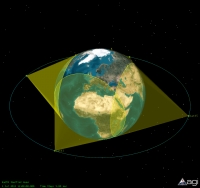 Laser Light, a company based in Virginia, US, has announced its intention to launch what it says will be the world's first commercial satellite communications constellation based entirely on optical wave technology.

The planned constellation is to be comprised of 12 satellites, eight primary satellites and four spares, which will be placed in a Medium Earth Orbit at 10,500 km.

The company says that the network will have an operating system capacity of 4.8 Tbps (terabits per second), including satellite-to-satellite optical crosslinks and satellite-to-ground optical up/down links of 200 Gbps.

One of the most interesting aspects of the system is that it will not rely on radio frequency (RF) spectrum, as typically used in maritime satellite communications.

Laser Light may rely on radio frequencies provided by its telemetry, tracking & control provider for initial satellite deployment and check-in, but after satellite initial manoeuvring and acceptance the system will rely solely on optical-wave technology to provide its services.

The network will use optical-wave StarBeam technology from Raytheon to run the Optical Satellite System [OSS], connecting to a global fibre network – terrestrial and undersea – to establish a meshed optical network that Laser Light says will offer connectivity options “previously unattainable by other satellite platforms.”

This process will use the same equipment used in today's fibre optic industry so interconnection can take place at global collocation points.

The company notes that the OSS will not convert optical signals to electrical signals at any layer of its network, and that consequently there should be minimal, if any, disruption due to evolution of transport technologies and protocols.

“Laser Light will benefit from Raytheon's technology, engineering expertise and pending patents through an exclusive licensing agreement, enabling the commercial communications market to benefit from the deployment of this next-generation, highly complementary all Optical Satellite System.”

Mr Brumley confirmed to Digital Ship that the commercial markets the system could be applied to would also include maritime, and that the communications service could be deployed on oceangoing vessels with an appropriate antenna.

The company believes that its service will be cheaper than current or planned satellite services, as it does not require wireless spectrum, regeneration stations, multiple gateway facilities, and other infrastructure associated with RF communications.

Laser Light aims to commence the development of its OSS constellation immediately, with the goal during 2013 and 2014 being to engage in source selection for the spacecraft, launcher, network interconnection, and distribution partners. In addition, the company says it will also undergo a series of field tests.

Satellite and ground equipment manufacturing, as well as the negotiation of ground facilities, is also expected to take place from 2013 through 2016.

The company says it then anticipates deployment of its OSS in the first quarter of 2017, with service availability expected in mid-2017.