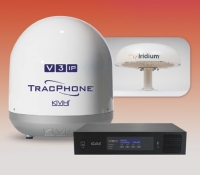 KVH has struck a partnership with Iridium to provide extended satellite coverage to customers equipped with its new TracPhone V3-IP system.

KVH's mini-VSAT Broadband relies on Ku-band satellites which cover north of the equator and most major shipping routes south of the equator. Iridium uses a network of Low Earth Orbit (LEO) satellites circling the planet; it can thus offer L-band service over 100 per cent of the Earth's surface, including Polar waters beyond the reach of geostationary satellites.

The switch is operated automatically by the network management functionality in KVH's Integrated CommBox Modem (ICM) and no human intervention is needed, says KVH.

“The lightweight, compact antenna units offer the benefits of low-cost broadband communications for vessels ranging from tugboats to tankers.”

Bryan Hartin, Iridium's executive vice president, sales and marketing, noted that his company was “enthusiastic about the expansion of our partnership with KVH.”

“We recognise the market's desire for an affordable turnkey complementary component for VSAT service and have collaborated with KVH to deliver a solution that eliminates coverage gaps and offers an alternative to the high prices of competing maritime satellite networks,” he said.