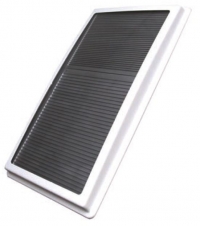 American company Kymeta, a developer of flat antenna technology for Ka-band connectivity, has announced that it has secured $50 million in funding and confirmed that it intends to introduce a high-capacity antenna for the maritime market with no moving parts.

Existing Kymeta investors including Bill Gates, Lux Capital and Liberty Global were joined in the financing by Osage University Partners and The Kresge Foundation.

The Redmond, Washington-based company has already partnered with Inmarsat to design a flat Ka-band antenna for airplanes, which it plans to launch in the first quarter of 2015. The goal is to allow airline passengers to access broadband services through Inmarsat’s Global Xpress network which is scheduled to be operational at the end of next year.

However, Kymeta confirmed to Digital Ship that it also intends to make the technology available for the maritime industry, initially in the Ka-band, and then possibly in the Ku- and L-bands.

“Merchant ships, cruise ships, and yachts of all sizes are all target markets for us. The technology is incredibly robust,” Bob McCambridge, Kymeta’s president and COO, told us.

Unlike typical VSAT satellite communications antennas currently in use in maritime, which use a stabilised dish that moves to keep the dish pointing at the satellite in orbit, Kymeta’s mTenna is flat and forms and steers the antenna beam electronically, which the company says eliminates the need for moving parts.

Its shape is that of a square tile, whose sides can be 30 to 70 centimetres long, and it is 3 centimetres thick – similar in form to an oversized pizza box.

“What the antenna does is: it creates a beam electronically. The beam then tracks satellites with no mechanical, moving parts,” Mr McCambridge explained, during an interview.

“That is really what becomes such a revolutionary and breakthrough aspect of our proprietary technology. It’s a next-generation alternative to expensive, heavy, power-consumptive, mechanically steered devices. Our antenna technology is similar to a flat panel TV display technology driven by electronics and software with no moving parts.”

Kymeta has designed a working Portable Satellite Terminal prototype that can deliver 30 mbps on the receive side and 3 mbps on the transmit side. The company is confident it can improve those speeds further to 50 mbps down and 5 mbps up for the maritime segment.

Mr McCambridge also insists that the mTenna has a “much lower cost of usage” than VSAT or Inmarsat’s BGAN terminals, the land-based equivalent to FleetBroadband.

“Our technology in combination with the high-throughput Ka-band satellites will be a revolutionary change and bring true broadband to the marine sector,” he added.

Kymeta intends to “work with all the major satellite systems operators and their distributors,” he said.

“There are several Ka-band operators already in full operation and several more who are launching their constellations now, including Inmarsat, O3b, Eutelsat, and Intelsat. So it’s a very exciting time and our product launch schedule lines up very nicely with the existing Ka-band operators, as well as the new capacity coming online in 2014-15.”

“Our development schedule allows our initial products to be available in the market place in the first quarter of 2015,” Mr McCambridge adds.

“Our initial launch is in the Ka-band. But we are not limiting our development to the Ka-band. There is a very large install base of Ku- and hybrid L-band users, especially in the maritime world. And so we’re very interested in delivering solutions that meet the needs of customers using those Ku- and L-band hybrid solutions as well.”

“It’s not a difficult process for us to deliver our technology in Ku-band,” he said, though he notes that Kymeta has not so far committed to a date for the introduction of either a Ku- or a hybrid L-band solution.

“What we would really like to do is line up some launch partners for Ku- and L-bands and develop our terminals to meet the system requirements of those partners. We’re in discussions with Ku-band providers now.”

“Although we haven’t set up a date for commercial availability in Ku- or L-band, it could be as short as a few months after the launch of our Ka-band solutions.”