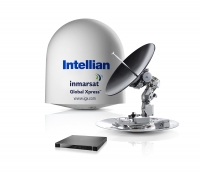 Intellian says that it has commenced the first deliveries of its v100GX 3-Axis VSAT communications antenna, a Ku-band antenna that can be converted for use with Inmarsat’s Ka-band Global Xpress (GX) service.

Intellian says that its service partner Marlink has ordered a “large number” of the Ku-band antennas and will supply them to an unnamed operator’s vessels as part of a communications package that includes Marlink’s VSAT service and Intellian hardware.

The 1m v100GX incorporates a dual-band, carbon fibre reflector and tuned radome. It can operate on the existing Ku-band and be converted to Ka-band when GX becomes available, currently expected to be next year.

Intellian says that this adaptation requires “minimal technical intervention”. The antenna reflector does not need to be changed as the RF section is mounted on a single modular chassis enabling quick conversion to Ka-band operation without any system re-balancing, says the Seoul-based manufacturer.

Intellian adds that technicians do not need to be especially trained to use the Global Xpress Conversion Kit.

“Our relationship with Marlink has been growing in recent years as operators and ship management recognise the need for well-designed and reliable systems which will maintain on-board communications wherever the vessels sail globally,” said Intellian’s president and CEO Eric Sung.

“We are delighted to be working with Marlink on major projects such as this recent v100GX installation.”