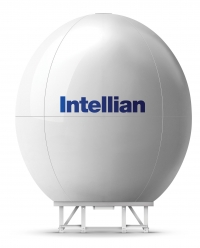 The new system allows ships’ crews to avoid having to physically change antenna components to achieve a band change or switch between multiple antennas.

The antenna manufacturer says that its engineers have overcome this problem through the use of built-in software and hardware which automatically switches between Ku-band and C-band, requiring no technical intervention.

On deck the 2.4m antenna is protected by a radome, which contains the Ku-band RF System, C-Band RF System, Antenna Control System and Power Supply Units. An optional air conditioning unit can be installed.

Below deck the antenna control unit is interfaced with ship information systems, such as a gyro.

The onboard unit can be controlled remotely via Intellian’s App ‘APTUS’. A graphical dashboard allows logging, recording and fine-tuning of the antenna for optimum performance.

In addition to the v240M, Intellian has also introduced a Ku-/Ka-band TV antenna, the s80HD WorldView TVRO. The 83cm dish simultaneously receives two Ka-band satellite signals and one Ku-band signal for DIRECTV North American programming, enabling all channels to be watched simultaneously.

This will allow the user to have access to HD TV in the Mediterranean as well as when travelling to and from the Caribbean and in North America.

Intellian says that it is simple to set up, as the user only needs to select a satellite television provider and connect to a satellite receiver to enable the WorldView Trio LNB to automatically switch frequency, depending on the region the antenna is operating in.

An Intellian App is available for download to enable users to select their preferred TV satellite whilst travelling from region to region, and operate their antenna from an iPhone, iPad or their chosen device.

XpressLink provides broadband data and voice connectivity across a redundant service for a fixed monthly fee. It also offers a free upgrade path to Global Xpress, the forthcoming Ka-band which Inmarsat says will achieve full global coverage by the end of 2014.

“We have been working in partnership with Intellian since 2011 and are pleased now to be able to offer their high quality FleetBroadband terminals to XpressLink users,” said Frank Coles, president of Inmarsat Maritime.

“XpressLink has achieved great success in meeting the needs of ship owners thirsting for the broadband data speeds of VSAT combined with the reliability of L-band. Today, we are able to add the dependability and long term security of Intellian FleetBroadband terminals to the XpressLink offering.”

Intellian and Inmarsat partnered in 2011 to begin development of Ka-band terminals for Global Xpress. The companies have since expanded the partnership and in March Intellian unveiled three new terminals designed to support all FleetBroadband services.