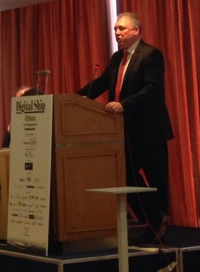 Software giant Microsoft has expressed an interest in developing an adapted version of its popular Skype product for use over satellite, according to Inmarsat.

Speaking at the Digital Ship Athens 2013 conference on November 27th, Inmarsat Maritime president Frank Coles spoke about the company's plans for the Service Enablement Platform (SEP) that will form the heart of its Global Xpress Ka-band product, which includes an application hosting infrastructure.

Software companies connected via the platform will need to be approved as Certified Application Providers (CAPs) - and it seems that Microsoft is among those interested in joining this club.

"One of the partners we are talking to that wants to be on the platform is Microsoft, with their Skype product," said Mr Coles.

"They're developing a 'satellite efficient' Skype product to be used."

Mr Coles noted that there are now approximately 75 CAPs already signed up to become part of the SEP, and also pointed out that the software systems set to be included on the platform will generally be set up to be able work over FleetBroadband as well as the higher speed GX service, rather than being designed to operate in a 1 Mbps environment.