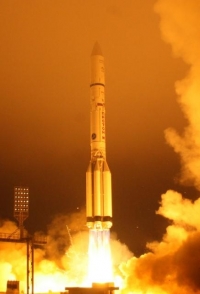 Inmarsat has successfully launched the first of three Global Xpress (GX) satellites, a major step forward in its bid to create the first global Ka-band satellite network for commercial use.

The other two satellites in the constellation are expected to be launched by the end of 2014.

The Proton Breeze M rocket carrying Inmarsat-5 F1 was launched from Baikonur Cosmodrome in Kazakhstan on December 8th at 12:12 GMT, and the satellite was correctly acquired by the Inmarsat Paumalu station approximately five and a half hours later.

Inmarsat said that the next couple of weeks will see its controllers command the satellite to perform seven chemical burns to raise Inmarsat-5 F1 to a geo-synchronous elliptical orbit. Just after Christmas, the satellite will have completed deployment of its solar arrays and reflectors and this will be followed by the electrical orbit-raising phase, taking the spacecraft to its final geostationary orbit.

This is scheduled to be completed by the end of January, ready for the start of payload testing at the beginning of February.

Global Xpress is part of a $1.6 billion investment by Inmarsat, and represents the first time a commercial operator has utilised Ka-band radio frequencies to deliver a global satellite service.

The Inmarsat-5 satellites are built by Boeing Satellite Systems International, which will also build a fourth back-up satellite, ordered in October.

“The successful launch of this first Inmarsat-5 satellite is a major landmark on our journey to deliver the world’s first globally available, high speed mobile broadband service.  We are on schedule to achieve full global coverage by the end of 2014,” said Rupert Pearce, CEO of Inmarsat.

Weighing over 6 tonnes at lift-off, the Inmarsat-5 F1 satellite has 89 Ka-band beams and is designed to generate approximately 15 kilowatts of power at the start of service, using the spacecraft's two solar wings employing five panels of ultra-triple-junction (UTJ) solar cells.