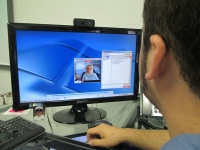 Globecomm Maritime has introduced its new crew voice and videoconferencing system based on the DigiCrew platform by DigiGone, to be called Access Chat Crew.

Globecomm was named as the first DigiCrew VAR by DigiGone when it announced the launch of the new package last week.

Following sea trials with several major shipping companies, Globecomm says that it worked in cooperation with DigiGone, one of its technology partners, to create Access Chat Crew, which uses compression to limit the bandwidth used during video and audio chats to 90 kbps, or 12 kbps for voice only chats.

“The crew market has been asking for live video chat capability for years, but very few ships have access to the 300 kbps to 1 Mbps needed to run this kind of application,” said Malcolm McMaster, president of Globecomm Maritime.

“Prior to Access Chat Crew, nothing existed in the maritime market which could give mariners high quality live video and voice, while minimising bandwidth usage over satellite-based internet services. Access Chat Crew solves this problem by making live video chat for crew both practical and affordable.”

Access Chat Crew operates via a web portal to make it easier to order and distribute to family and friends onshore, allowing crew members to order and renew licences using the PayPal system.

The software itself can be installed on personal devices such as laptops, tablets, smart phones and USB storage devices, giving the crew member the flexibility to use the application anywhere that an internet connection is available.

Globecomm says it is offering a limited number of free trial licenses for seafarers to use the system during the upcoming Christmas and New Year holidays – more information is available from local Globecomm Maritime sales representatives.