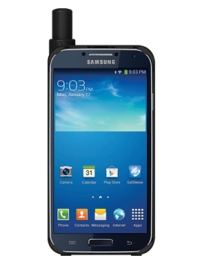 Thuraya has launched an Android version of its SatSleeve device, which brings satellite connectivity to smartphones. The first version, launched less than a year ago, was designed for iPhones.

The latest edition of the SatSleeve is compatible with the Samsung Galaxy S3 and S4. With the device, users can turn their smartphone into a satellite phone to make phone calls, send SMS messages and access apps via Thuraya’s satellite network.

Users dock their Android smartphone into the SatSleeve and operate it normally via the Thuraya Satellite network. Its built-in SOS button allows users to call one predefined number even without their smartphone attached.

Additionally, users can send SMS messages, send and receive e-mail, and access popular social media and instant messaging apps such as Facebook, LinkedIn, Twitter and WhatsApp, among others.

The SatSleeve can be used on the Thuraya network either with a Thuraya SIM card or with a standard GSM SIM card available from one of Thuraya’s GSM roaming partners. The Android version is available from all Thuraya Service Partners from January 15, 2014.

Randy Roberts, vice president of Innovation at Thuraya, said: “This latest release of the SatSleeve illustrates Thuraya’s focus on market needs by addressing the installed base of Android devices and enables us to provide easy access to satellite services for our Android customers.”

“Thuraya is progressively working to provide our users with flexible choices for their satellite communication needs when they are travelling or working from areas unserved by terrestrial networks. Whether our customers need connectivity through voice or data services, we are there to keep them connected.”