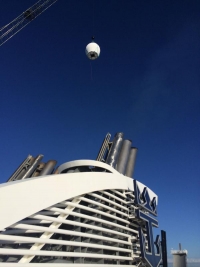 Royal Caribbean reports that bandwidth speeds exceeding 500 Mbps have been achieved during system tests for the O3b satellite communications solution it is rolling out on two of its cruise ships.

The Miami-based cruise line will rely on O3b’s constellation of Medium Earth Orbit (MEO) satellites to provide connectivity on board the Oasis of the Seas and the Allure of the Seas once implementation of the services is completed.

A set of custom-built antennas were shipped from Israel to Florida last month, and installed on Oasis of the Seas. Royal Caribbean says that testing showed the ship could match broadband connection speeds on shore.

“O3b, our satellite communications partner, calls it 'fibre speed with satellite reach,' and this is exactly the result we are seeing in our tests,” Mr Martin said.

Adam Goldstein, president & CEO of Royal Caribbean International, said that passengers on board the ships would be able to use the new services to stream video or post video clips to Facebook.

“If you're a first-time guest on one of these ships, you won't realise how much work it took to make the wireless so pervasive – or that your cell 'tower' is 4,900 miles over your head. If you are a return guest, you'll be blown away by the improvement,” he said.

The cruise line says it is currently developing pricing plans for added service.

O3b’s network is set to be bolstered by the imminent launch of a second set of four satellites to complete its eight-satellite constellation, with the company having announced that it has completed all required ground testing on the new spacecraft and that they are now ready to ship.

The satellites will shortly begin their journey from the Thales Alenia Space facility in Rome to Kourou, French Guiana, to be launched from the Centre Spatial Guyanais (CSG) as early as the first week of June (pending final confirmation from launch provider, Arianespace).

Following the launch and integration of these new satellites with the four already in orbit, O3b says it will start commercial service for all O3b customers on a global basis.

“With four more satellites finished and four more to launch later in the year, 2014 is the breakout year for O3b,” said Steve Collar, CEO of O3b Networks.