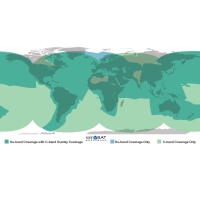 KVH Industries has announced that it has doubled the capacity of its mini-VSAT Broadband network off the West African coast to support the oil and gas industry.

The additional Ku-band capacity became available in April in this oil-rich area, where offshore supply vessels (OSVs) operate as a link between drilling rigs, cargo ships, and operations on shore.

KVH says that the capacity increase off the West African coast follows a model it built when extending its mini-VSAT Broadband coverage for OSVs in the Gulf of Mexico.

"Many of the offshore supply vessels operating across the globe rely on our mini-VSAT Broadband service, and we've seen how valuable this service can be in regions with strong oil industry activity, such as the Gulf of Mexico, Brazil, and the North Sea,” said Brent Bruun, executive vice president of KVH's Mobile Broadband Group. “With demand rising along Africa's western coast, we're proud to deliver more capacity and better service for our OSV customers, as well as the busy shipping lanes in the region."

KVH’s mini-VSAT Broadband network combines 19 Ku-band transponders and three C-band beams. The US-based company has built this global infrastructure by leasing available commercial satellite capacity, rather than investing in its own satellites. The TracPhone V-IP antennas designed for this network are smaller than typical VSAT antennas, ranging from 37cm to 1.1m.

KVH says that the ongoing expansion of its mini-VSAT Broadband network in Africa follows network upgrades in other parts of the globe and supports its recently announced IP-MobileCast content delivery service, which will be available to subscribers this month.

Using the same network already streaming into more than 4,000 onboard terminals worldwide, IP-MobileCast will deliver a separate data stream of licensed news, sports, entertainment, and training, as well as electronic chart updates and weather information.