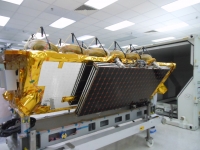 O3b Networks reports that it is set to launch the latest satellites in its network on July 10, which will complete its initial constellation.

Those first four satellites were launched in 2013 and the company started bringing customers up on its network in the spring of this year.

A third group of satellites is due to launch in Q1 2015, with the company saying that it will then be able to expand its network depending on customer demand.

The July 10 launch is set for lift-off at 18:55:56 UTC, using the Soyuz ST-B launcher. Arianespace will send the four latest satellites into a circular orbit at an altitude of 8,062 km following the launch from the Guiana Space Center in French Guiana.

“When we first envisioned bringing high-speed connections to the most remote and underserved people around the world, we knew this was a project that could dramatically improve the lives of billions of people,” said O3b CEO Steve Collar.

“With the completion of our initial eight satellite constellation, that vision is now a reality for the other 3 billion people who need it most.”

The O3b network delivers broadband connectivity everywhere on Earth within 45 degrees of latitude north and south of the equator, including places like Latin America, Africa, the Middle East, Asia and Australia.