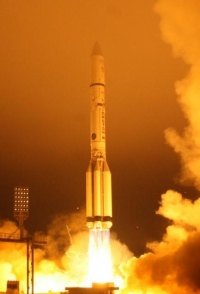 The Russian space agency Roscosmos has said that its Proton Breeze M launch vehicle, the same spacecraft that will be used to launch Inmarsat's Global Xpress satellites, has completed its first launch since suffering a dramatic failure in May.

On September 28, Proton successfully placed a Russian military satellite into geostationary orbit, lifting off from the Baikonur Cosmodrome in Kazakhstan at 12:23 a.m. Moscow time.

In May, Proton experienced its fourth launch failure in two years, setting back Inmarsat’s Global Xpress project by delaying the launch of the Inmarsat-5 F2 and F3 satellites. Proton had successfully launched Inmarsat-5 F1 in December 2013.

Russian Satellite Communications Co. (RSCC), whose AM4R satellite was lost during the May failure, has said it wants two Proton launches by the end of the year. RSCC launches are conducted by the Russian government as part of a Federal space programme, rather than by ILS.

In July, Inmarsat announced it had signed a deal with SpaceX for the launch of the fourth Global Xpress satellite, as well as the launch of an S-band payload on a satellite jointly owned and funded by Hellas-Sat.

When asked by Digital Ship for its reaction to the launch, Inmarsat said it was "encouraged to see the successful return-to-flight mission of the Proton-M on Sunday (28th September). This is good news for the launch schedule of the Inmarsat-5 satellites (I-5 F2 and F3) and reinforces our confidence that the Global Xpress mobile, high-speed broadband service will be commercially available on a global basis by the end of the first half of 2015."

In related news, Inmarsat today announced that Intellian’s FleetBroadband 500 antenna has been approved for use with its XpressLink service.

XpressLink, which provides integrated Ku and L-band communications via a combination of VSAT and FleetBroadband, has already been using Intellian’s V100GX VSAT antenna for the past two years. The addition of the FB500 for the L-band portion of the service marks a further development of Inmarsat and Intellian's growing partnership, which has been in place since 2011.