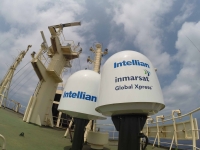 GX60 and GX100 on the Hyundai Bangkok Intellian

Intellian has reported that the first Global Express (GX) tests have taken place on its GX60 and GX100 VSAT terminals.

It marks the first time Inmarsat’s Ka-band Global Express network has been tested at sea, achieving a reported download speed of 24 Mbps and an upload speed of 4 Mbps.

The tests took place on board the container ship Hyundai Bangkok, which travelled from Busan in South Korea to Hong Kong, crossing the South China Sea. Intellian was represented on board by CEO Eric Sung, who was joined by a team from Inmarsat.

“With extensive testing together with the Inmarsat team we were able to prove the network and equipment through various user platforms,” said Mr Sung.

“We obtained impressive speed tests and delivered video direct from the ship back to our colleagues exhibiting at the recent SMM Hamburg event.”

The 60cm GX60 and 1m GX100 were designed specifically to operate with Global Express, and include the new Intellian GX Below Deck Unit (BDU), which features a GX modem fully integrated within the system.

Intellian says the terminals enable automatic satellite and beam switching when crossing from one satellite coverage region to another, and also support a low elevation angle that will bring reliable connectivity even at high latitudes.