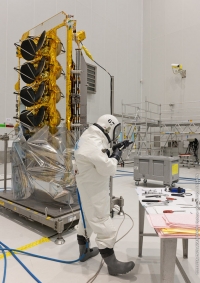 An O3b satellite is fuelled before launch O3b

O3b has announced that it has successfully launched the final four satellites of its initial Ka-band constellation, bringing the total number of satellites to 12.

The launch took place at the Space Center in Kourou, French Guiana, with previous launches having been undertaken in June and July. All 12 satellites have been launched in under six months.

These latest additions to the Ka-band constellation will undergo in-orbit testing before integrating with the network in early 2015. O3b says the medium earth orbit (MEO) system will provide throughput exceeding 1 Gbps per connection and latency comparable with terrestrial networks, with total fleet capacity of over 100 Gbps.

“We are so excited to be able to bring such a significant increase in capacity and capability just a few short months after our last launch,” says O3b CEO Steve Collar.

“Four years ago, O3b was still just an idea, driven by the conviction that everyone should share the opportunity that being connected and online brings. Now we have more than 100 Gbps of capacity in a unique and scalable orbit, connecting and enabling customers around the world.  It’s a remarkable journey and we could not be more excited or optimistic about the future – a future in which we intend to increase our capacity in orbit to more than 1 Tbps.”