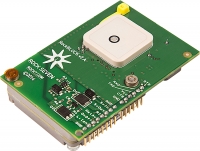 Rock Seven has announced the launch of RockBLOCK Mk2, a self-contained unit with satellite connectivity designed to enable Machine to Machine (M2M) communication and Internet of Things (IoT) applications.

RockBLOCK Mk2 can send messages of 340 bytes and receive messages of 270 bytes using Iridium Short Burst Data (SBD), and comes with a variety of antenna options. The ‘naked’ version comes with either an in-built Iridium antenna, or an optional SMA connector for integrating with external antennas.

The manufacturer says the Mk2 is designed to work with any platform with a serial or USB port, including Arduino, Raspberry PI, Intel Edison, as well as Windows, Mac and Linux computers.

The ‘naked’ versions of the hardware are priced at £159, while the RockBLOCK+ will cost £189. Line rental for the units is £8 per month with no annual contract, and Rock Seven says individual transmissions can be sent from as little as £0.03.