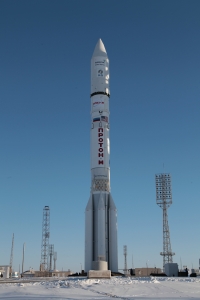 Inmarsat F-5 on the launchpad Inmarsat

The companies have worked together for over twenty years, and Inmarsat says AST is investing over $100k in network and traffic management tools to compliment the GX services.

“As we continue to countdown to the launch of our third GX satellite and the completion of the global high-speed broadband network, scheduled for early in the second half of 2015, the appointment of AST represents a further significant step in bringing the benefits of GX to the widest possible group of end users,” said Michele Franci, Inmarsat CTO.

Inmarsat has successfully launched two GX satellites so far, with the Inmarsat 5 F-1 already in commercial service. The F-2 was launched in early February, and is expected to reach its final geostationary orbit by the end of March, whereupon it will begin payload testing. The F-3 is due to launch in Q2 2015.

“We believe this is a significant step-forward in bringing the benefits of high-speed connectivity to existing and new markets and are delighted to have extended our strategic relationship with Inmarsat to cover this revolutionary service for enterprise and maritime markets.”