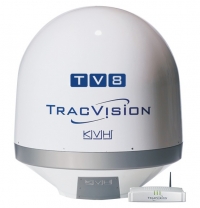 KVH has announced the introduction of the TracVision TV8, a new antenna system designed to deliver satellite television to vessels worldwide.

{mprestriction ids="1,2"}According to KVH, the TracVision TV8 is compatible with nearly all Ku-band services around the globe, and also supports services such as DIRECTV, DISH Network and Bell TV in North America, as well as TrueVisions, Astro, and Sky TV in the Asia-Pacific region.

The 81cm (32 inch) diameter system is fully stabilised and comes with an IP-enabled TV-Hub, along with a single coaxial cable for power, data, and video, allowing for straightforward installation.

“The TracVision TV8 has the top engineering characteristics our antenna systems are known for around the world,” says Martin Kits van Heyningen, CEO at KVH.

“With its advanced tracking and extended coverage area, it is an ideal system for a superyacht in the Mediterranean, a tanker ship in the Baltic, or any number of ships on the world’s oceans. These rugged systems are fully stabilised and stay locked on the satellite even in heavy seas.”{/mprestriction}