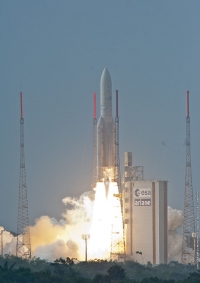 Telenor Satellite Broadcasting has announced the successful launch of its new Ka-band satellite, THOR 7, putting the company on track to introduce high-throughput services to ships in Europe and the North Atlantic by the end of the year.

{mprestriction ids="1,2"}THOR 7 was launched on Sunday April 26, 2015 at 20:00 UTC, from the Guiana Space Centre in French Guiana on board an Ariane 5 launcher. The satellite was successfully injected into geostationary transfer orbit approximately 28 minutes after lift-off.

"I am delighted to see that THOR 7 has safely reached geostationary transfer orbit and thank both Arianespace and our manufacturing partner SSL for this successful launch," said Morten Tengs, CEO, Telenor Satellite Broadcasting.

"From its 1°West location, the THOR 7 satellite will provide growth capacity for DTH services across Central and Eastern Europe and deliver optimal satellite coverage across Europe's business shipping lanes for the provision of maritime VSAT services."

THOR 7 will now undergo in-orbit testing. Television services are expected to begin in six weeks, though additional testing will take place on the HTS Ka-band services before the full commercial service is ready, expected to be in Q4, 2015.{/mprestriction}