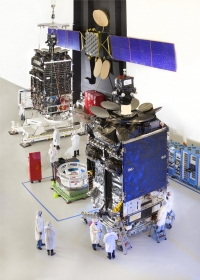 Boeing has built all three I-5 satellites for Inmarsat Boeing

Inmarsat has confirmed that its third Global Xpress (GX) satellite – Inmarsat-5 F3 – has safely arrived at the Baikonur Cosmodrome in Kazakhstan in anticipation of its launch later this month.

This is the third GX satellite which, when combined with I-5 F1 and F2 already in orbit, will allow Inmarsat to offer global GX coverage.

Inmarsat’s 5th generation satellites – which form the GX network – have all been built by Boeing Satellite Systems International in California.

“We are approaching the completion of our GX constellation and the arrival of Inmarsat-5 F3 at the Baikonur Cosmodrome is another significant milestone,” said Michele Franci, CTO of Inmarsat.

“This project represents a major commitment by Inmarsat and its successful completion and the start of global commercial services later this year will bring to life the prospect of the Internet of Everywhere.”

“For the first time, we will be able to deliver seamless, superfast broadband communications across the globe – on land, sea and in the air – from one single operator.”

Inmarsat says it is planning to commence global commercial GX services in the second half of this year, with the new network complementing rather than replacing Inmarsat’s existing fleet of L-band communication satellites.

Each of the three satellites in the initial GX fleet has 89 beams and six steerable spot beams for multi-regional coverage. A GX satellite, with a design life of 15 years, weighs 6,100kg at launch with a wing-span wider than a Boeing 737.{/mprestriction}