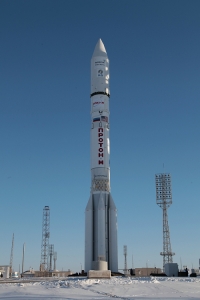 Inmarsat has been forced to delay the launch of its final Global Xpress (GX) satellite following the failure of the preceding Proton Breeze M launch from the Baikonur Cosmodrome in Kazakhstan on Saturday 16 May.

{mprestriction ids="1,2"}The Inmarsat-5 F-3 (I-5 F3) satellite is the third in the GX constellation, and once in orbit will complete global coverage on the Ka-band service. It arrived at the launch site at the start of May, and was expected to launch shortly.

But on Saturday, the Proton rocket carrying Mexico’s Centenario mobile communications satellite failed about eight minutes and 10 seconds into its launch, resulting in the loss of the satellite and rocket, and an indefinite delay to the launch of the I-5 F3.

“This incident involving a failed Proton launch from the Baikonur Cosmodrome is extremely unfortunate and will inevitably delay our launch plans for our third Global Xpress satellite,” said Rupert Pearce, CEO of Inmarsat.

“This is the third time our Global Xpress programme has suffered launch delays because of Proton launch failures. Although in the past, Proton has returned to flight within a few months of a launch failure, it will not be possible to determine the length of the delay in the launch of I-5 F3 until the cause of the Centenario launch failure is established.”

“Customers are understandably anxious to see the delivery of GX services on a global basis, and as soon as we have sufficient information to ascertain the new launch date for I-5 F3, we will make the information public, as well as comment further on the impact of the delayed launch of I-5 F3.”

According to Inmarsat’s launch partner International Launch Services (ILS), the Proton rocket carrying the Centenario satellite suffered a ‘disabling anomaly’ during the operation of the third stage. ILS will now form its own Failure Review Oversight Board, which will review the Russian State Commission’s report into the crash.

Inmarsat claims that the delay in the launch of the I-5 F3 is currently expected to have a small negative effect on 2015 revenue and earnings, but that the impact on subsequent years cannot be determined at this stage due to ‘timing uncertainty’. As a result, Inmarsat is suspending its guidance of an 8-12 per cent CAGR (Compound annual growth rate) in wholesale MSS revenues over 2014-16.{/mprestriction}