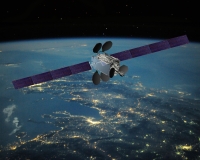 Horizons 3e will be based on Intelsat's EpicNG class design

Intelsat and Japan’s SKY Perfect JSAT Corporation have signed an agreement to form a joint venture that will launch a new satellite with C-band and high throughput Ku-band capacity to meet connectivity demands in the Asia-Pacific region.

{mprestriction ids="1,2"}The satellite, to be known as Horizons 3e and stationed at the 169 degrees East orbital location, is based on the Intelsat EpicNG design and will complete the global footprint of the Intelsat next generation platform following its launch in the second half of 2018.

“With Horizons 3e, we will introduce the Intelsat EpicNG platform to the Asia-Pacific region, completing our global high throughput footprint and enhancing our IntelsatOne Flex service platform.”

“The scalability, power and flexibility of Intelsat EpicNG will provide commercial and governmental aeronautical and maritime services with unprecedented seamless, contiguous broadband coverage over the most widely trafficked routes from the Atlantic to the Pacific.”{/mprestriction}