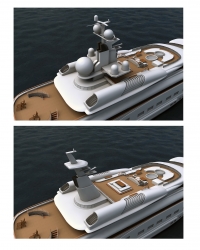 Panasonic Avionics Corporation and Kymeta Corporation have announced a new agreement to work together to bring flat panel antenna technology for VSAT communications to maritime markets.

{mprestriction ids="1,2"}Under the terms of the deal, Panasonic will order “a significant volume” of Kymeta's flat panel antennas and use Kymeta mTenna technology to manufacture and distribute maritime terminals for vessels around the world.

The antennas are expected to go through prototype testing this year and should be commercially available in 2017, the companies said.

Kymeta says that its technology is much lighter than traditional maritime satcom antennas, and doesn’t use mechanical components – instead it relies on electronically steered, lightweight, flat panel antennas that can acquire and track a satellite from a moving platform, potentially opening the opportunity for cheaper systems that require less maintenance and that can be carried on board a ship for installation.

Panasonic is looking to combine this technology with its own high-throughput satellite network to offer new services and terminals to the maritime market.

This will include purchase and distribution by Panasonic of a new technology from Kymeta that enables the combination of multiple apertures into one antenna, allowing separate flat panel antennas (perhaps installed on opposite sides of a ship) to effectively be combined  into a single, more powerful ‘virtual’ antenna that will provide better connectivity when they are all connected to the satellite.

“Kymeta's goal is to use our mTenna technology to help realise the power of a truly connected future for any platform that moves around the world, and this agreement is another major milestone towards that goal,” said Dr Nathan Kundtz, chief executive officer of Kymeta.

“We are excited to partner with Panasonic and help their maritime customers with higher speed internet connections for vessels anywhere in the world.”

Kymeta’s roll out of its technology into maritime is one part of a global market strategy that will see the company target all sorts of moving vehicles, including future connected cars.

As such, it is aiming to move towards a goal of mass production of these flat panel antennas that will significantly reduce their cost per unit, down to just a few hundred dollars in the case of a flat antenna for a car. It has already begun to move in this direction, having reached an agreement with SHARP to use the Japanese company’s LCD TV manufacturing equipment to build antennas on a more industrial scale.

While a shipboard system is likely to be more expensive than that used by a car, the company says it is aiming to bring maritime antennas to the market at a cost vastly below that of today’s stabilised VSAT antenna units.{/mprestriction}