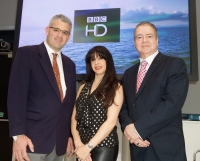 UK broadcaster BBC has announced the launch of a global TV entertainment channel produced exclusively for cruise ships and the wider maritime market, via its BBC Worldwide division.

Content on the new channel will cover all genres ranging from drama, comedy and factual entertainment to natural history and documentaries. Selected shows will air on BBC HD close to their UK broadcast time, the company said.

BBC HD will be added to the existing BBC World News channel, which launched on MTN TV in 2010 and is available on cruise ships throughout the world.

“The BBC was our initial launch partner when MTN TV was rolled out in 2010, and once again they are leading the way in pioneering more TV programming choices for cruising passengers around the world,” said Walé Adepoju, executive vice president, media & content at GEE.

“The addition of the BBC HD channel is part of our expansion plan for MTN TV to provide more entertainment options relevant to today’s cruising market.”{/mprestriction}