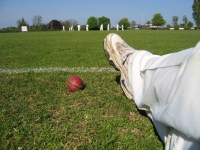 Global Eagle Entertainment (GEE) has entered into an agreement with the International Cricket Council (ICC) to offer telecasts of major cricket events to ships and to commercial aircraft through its global VSAT networks.

{mprestriction ids="1,2"}The ICC has granted GEE worldwide rights to provide 1,140 hours of live cricket programming through to 2019. The 2017 Champions Trophy and 2019 Cricket World Cup are among the 172 events to be offered.

“A key component of the ICC strategy is to create an environment where cricket is exciting to play and watch, while improving the quality and reach of the international game. Our partnership with GEE enables us to expand our live broadcast reach to include airline and maritime audiences across the globe, which is an exciting opportunity,” said Campbell Jamieson, ICC general manager – commercial.

This deal will add to GEE’s existing portfolio of sporting events agreements, following a global distribution contracts with Lagardère Sports and Premiership Rugby signed last year to broadcast telecasts of their sporting events.{/mprestriction}