Vanuatu project to supply Fleet One to five ships 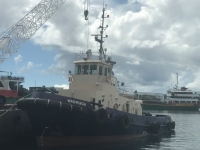 Inmarsat is to supply five Fleet One units to a pilot initiative looking to change the way ships connecting island communities in the Pacific archipelago of Vanuatu communicate, part of an IMO-endorsed capacity building programme based on co-operation between the International Mobile Satellite Organization (IMSO) and the Government of Vanuatu.

{mprestriction ids="1,2"}The Vanuatu archipelago stretches 1,300km from north to south and comprises 82 small islands, of which 65 are inhabited. Waterborne transportation is relied upon for day-to-day life on the islands, however, the small vessels used to connect them typically fall outside the scope of international maritime conventions and safety standards, which tend to focus on large commercial tonnage.

“Despite providing a lifeline to the communities they serve, vessels sometimes don’t have their own lifeline if something goes wrong. They can be poorly equipped to communicate in an emergency, and often rely on mobile phones which can go out of range.”

The five Fleet One units are destined for the 20m landing craft Valerie, the 28.5m tugboat Warringa and three cargo/passenger vessels Makila (22.5m length), Kiwi Trader (31m) and Vanuatu Ferry (57m). Installation and training for the vessels’ Masters will take place in Port Vila, the archipelago’s capital city and site of its largest harbour.

The pilot project will see Inmarsat provide three months of free data usage, while its free 505 emergency and distress calling service, which directs calls to the Maritime Rescue Co-ordination Centre (MRCC) best able to handle an emergency, is being offered on a permanent basis.

“Ensuring safety of life at sea is a matter of optimum capacity utilised by the operators. It can be best achieved through the development of the right human skills and the use of befitting technologies such as Fleet One, which is expected to enhance capacity of operators, in particular, for non-convention vessels operating in the environment of small island states and we intend to replicate such laudable initiatives in other regions in the future,” said Capt Moin Ahmed, director general of IMSO.{/mprestriction}