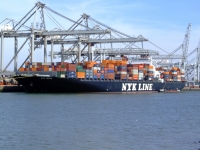 A new collaborative group including Japanese shipyards and the country’s most prominent shipping lines is set to work together on technologies to support autonomous shipping, sharing costs and expertise as they aim to drive the introduction of self-navigating ships by 2025, according to reports in Japan’s Nikkei business newspaper.

{mprestriction ids="1,2"}Shipbuilder Japan Marine United will be joined by Mitsui O.S.K. Lines and NYK Line in the project, which is targeting the development of steering systems controlled by artificial intelligence, linked via Internet of Things technologies to other vessel systems while also having access to real-time weather and sea state data from shore.

Nikkei reports that Japan Marine United intends to include the new self-navigating system in the construction of some 250 new ship models in the future.

The Japanese paper also notes that the unmanned vessel development project is being backed by the Japanese government, with the joint development of self-navigating ships expected to be included in an upcoming revised national revitalisation strategy, and the Ministry of Land, Infrastructure, Transport and Tourism intending to lend its support as required.{/mprestriction}