NEXT satellites arrive ahead of October launch 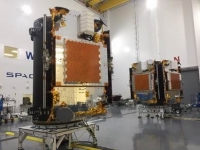 Iridium has confirmed that 10 satellites from its Iridium NEXT roll-out have been delivered to Vandenberg Air Force Base (VAFB) in California, ahead of the third scheduled launch in the company’s next generation satellite programme on October 4.

{mprestriction ids="1,2"}Pre-launch processing activities are now underway, which includes mating the satellites to the dispensers and completing fuelling ahead of their launch on a SpaceX Falcon 9 rocket early next month.

The Iridium NEXT programme includes provisions to launch a total of 75 satellites using the Falcon 9 vehicle, from the 81 satellites that are being built – 66 are required for the operational constellation, with the remaining 15 split between nine on-orbit spares and six ground spares. The October 4 launch of 10 satellites is the third of eight planned launches.

“Our teams, not only in California, but also in Arizona and in Northern Virginia, have maintained a steady and impressive pace when it comes to pre-and-post launch operations,” said Matt Desch, CEO, Iridium.

“We’re setting a new industry standard for satellite deployment, in terms of both time and efficiency. On our end, all systems are go for our coming predawn launch.”{/mprestriction}