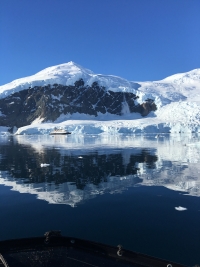 Fleetrange and KNL Networks have launched a new Arctic situational awareness system that combines Internet of Things (IoT), Cloud and 3G/HF hybrid telecommunications technology to provide ships with data on weather, ice conditions, and ship tracking, as well as offering access to e-mail.

{mprestriction ids="1,2"}The ‘Fleetrange with KNL’ technology developed by the two companies has now completed a trial on board Salén Ship Management’s expedition cruiser Hebridean Sky during its Arctic voyages around Svalbard. This included testing of the Fleetrange IoT Cloud platform which uses KNL’s 3G/HF hybrid communications technology to transfer data.

The ship was fitted with KNL’s cognitive and software defined radio equipment and Fleetrange IoT units, which were systematically tested and monitored during the trial, as the ship travelled around Svalbard and all the way to the Arctic ice edge.

“Fleetrange and KNL has always been a big help on our entire stay in Svalbard, especially on those areas that we don't get any signal at all with the VSAT, by receiving the updated ice charts and weather forecasts in GRIB files, it truly helped us,” said Dindo Talon, IT officer on the Hebridean Sky.

“I am impressed with how useful the HF e-mail is when nothing else is available to connect and contact from the head office, supports, etc. And it enabled us to send reports despite the lost connection on our VSAT.”

KNL’s technology relies on an automated cognitive mesh-type radio network, where ships within 3G coverage act as base stations for ships further out at sea, and as such can operate independently of any satcom systems on board.{/mprestriction}