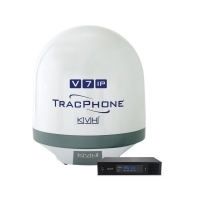 KVH has agreed a partnership with Ocean Exploration Trust (OET), an international scientific research organisation founded by oceanographer Dr Bob Ballard, to provide services and products to OET in exchange for feedback on various KVH products.

{mprestriction ids="1,2"}For the first phase of the project, coinciding with OET’s 2017 expedition in the Eastern Pacific Ocean, a TracPhone V7-IP VSAT system has been installed on the 64-metre exploration vessel Nautilus, providing internet access and multicast daily news content for the 48 researchers and crew.

“It is an honour for KVH to support the fascinating work of the Ocean Exploration Trust,” said Brent Bruun, KVH’s chief operating officer.

“Dr Ballard and his team onboard the Nautilus represent not only the leading edge of scientific research, but also an incredible inspiration to students and adults alike who long to see and understand the ocean’s mysteries.”

The 2017 Nautilus expedition represents the third year of exploration in the Eastern Pacific Ocean, documenting and surveying unexplored regions from British Columbia, Canada, along the West Coast of the United States, to Baja California, Mexico.{/mprestriction}