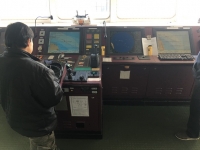 Cyber security company Naval Dome reports that it has completed pilot testing of a cyber defence system for Lloyd’s Register (LR) aboard XT Shipping’s 4,300 TEU container ship Zim Genova. The vessel was operational during the tests, which were supervised by the classification society and ECDIS provider Totem Plus.

{mprestriction ids="1,2"}The pilot was carried out as part of LR’s ongoing work to develop maritime cyber security guidelines, with the tests the first of their kind to be carried out on a vessel in transit, according to Naval Dome.

The process involved an attempt to gain unauthorised access to an onboard ECDIS, though this was confined to an attempt on a back-up system to mitigate against the risk of any consequent operational failure.

Naval Dome’s cyber security systems were implemented into the network in preparation for the tests, to detect and alert on the introduction of any unapproved media, such as USB sticks, as well as suspicious system updates, system anomalies and access by unauthorised personnel.

A second phase of the project featuring an even more extensive set of penetration tests is set to be carried out in the near future, Naval Dome says.

“We found the system provides a level of security without disruption to ship systems and operations. We hope to use the information and experience gained from the Naval Dome tests in the development of guidelines for maritime cyber defence.”{/mprestriction}