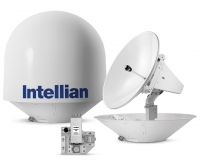 Maritime satellite antenna manufacturer Intellian has refuted media reports that cyber vulnerabilities in shipboard antennas could allow the systems to be hacked and used as a ‘microwave-based weapon’, telling Digital Ship that there is “no practical way” of successfully carrying out such an attack.

Mr Santamarta’s presentation, based around his ‘Last Call for SATCOM Security’ whitepaper, included a section on hacking maritime satellite antennas, where the researcher claimed to have found a way to compromise an Intellian antenna by using a copy of the firmware downloaded from the internet that included hardcoded access credentials.

The paper also describes vulnerabilities in the ACU (Antenna Control Unit) which, once compromised, could allow the attacker to take “full control of the antenna.”

Mr Santamarta’s whitepaper goes on to discuss the potential for “cyber-physical attacks”, where a compromised antenna could be set to transmit radio frequency waves directly at a chosen target as “an intentional radiator” – a claim which has been reported in various quarters as creating a weapon that could ‘microwave’ people nearby.

In response to a request for comment from Digital Ship, Intellian noted a number of specific issues which it said made such an attack impractical in the case of a properly installed antenna currently operating on a ship at sea.

“The report mentioned a number of vulnerabilities based on a TVRO antenna with old firmware. The firmware was updated 18 months ago and many of the findings would not be possible with a current model of antenna. Intellian always encourage customers to upgrade to the latest version of firmware,” the statement said.

“Some of the media-published statements, especially in the UK tabloid press, have misquoted the author’s findings – there is no practical way that a VSAT system can microwave cook someone from the inside out. There are many safeguards, beyond just the antenna, to ensure that this would never occur.”

“The BUC (microwave transmitter) inside a VSAT terminal is designed in such a way that if it loses connection with the satellite it stops transmitting. Also, the power output from modern VSAT terminals used at sea is low-powered and so the safe distance is generally inside the radome.”

“Some of the photographs published by the media actually show a Sat TV antenna and report that this could be used to track aircraft, or microwave people. Both impossible. The most dangerous thing with a TVRO antenna is if you dropped it on your foot it may hurt!”

Like all connected devices, Intellian notes that properly installing antennas using recommended industry best practices like setting unique passwords at the time of installation will have a major impact on ensuring that onboard equipment is secure.

“Intellian also encourage users to change the default passwords and user IDs just as you would do on any home product, this is a first step in protecting the products from being attacked. Network providers (SPs) also should protect their networks to hide the terminals and put in place firewalls to protect the traffic and the equipment,” the company said.

Intellian and IOActive have been in contact since the whitepaper was published, and researchers on both sides are now working together to ensure that any vulnerabilities have been closed, the antenna manufacturer added.

“Both companies will continue to cooperate to ensure the safe operation of the antennas out on board ships,” Intellian said.

“Intellian will also encourage network providers and Service Providers to ensure that they change default user IDs as recommended in the installation documentation and product training. Intellian have contacted the operators of unprotected networks and assisted them in closing access to these terminals.”

IOActive’s VP sales, strategy and strategic services, John Sheehy, also added his own comment with the Intellian statement, noting that his company “look forward to collaborating with Intellian to address the risks Ruben Santamarta discovered in his research. Based on our early discussions, we are confident the collaboration will successfully produce a more secure solution moving forward.”

“We appreciate it’s difficult to explain complex, technical matters in a way that is understandable to a general audience. While the cyber-physical attacks Ruben described use similar principles to microwaves, none of the systems we assessed can ‘cook a person from the inside out’.”{/mprestriction}