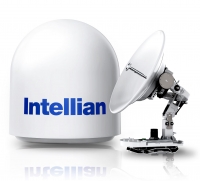 Intellian has launched its first sub-metre Ku to Ka-band convertible maritime VSAT antenna, with the new 85cm Intellian v85NX able to switch between bands by changing the RF Assembly and Feed while maintaining the same dual-band reflector and radome.

{mprestriction ids="1,2"}The v85NX supports current GEO constellations but has been designed to be compatible with future networks, such as new proposed LEO and MEO constellations, the company says.

Intellian says that its RF design has also substantially increased gain compared to existing 80cm class systems operating in the Ku band, and has several different BUC power options available, up to 25W, that provide a wider operational range than many other sub-1m-class antennas.

The system uses a modular component design to minimise the number of potential spares needed, with 13 common spare parts now adequate to fix most potential problems. The v85NX combines Tx, Rx and DC power into one coaxial cable, and the new radome design has a single external cable connection, combined with dynamic motor braking, so the radome no longer has to be removed during installation.

In related news, Intellian will also introduce a new Global Xpress terminal to its ‘1m and above’ range, adding the 1-metre GX100HP system, which has been designed with a higher power 10W GaN BUC option.

The increase in BUC power allows a higher level of bandwidth, with upload speeds of 5 Mbps and over 10 Mbps download capability on Inmarsat’s Fleet Xpress service. The GX100HP can also be used in a dual antenna configuration using the recently launched Intellian GX Mediator to mitigate blockage from any vessel obstructions.

The 10W HP Upgrade Kit can be used on an existing GX100 to swap out its BUC. The pre-assembled kit has everything necessary to easily convert a 5W BUC to a 10W BUC using four screws.

Alongside its new antennas Intellian has also upgraded its antenna management and control platform, AptusNX, which can be operated by plugging a laptop into the ACU without any need to download extra software.

The software includes an installation wizard with a step-by-step commissioning guide to complete setup, and provides enhanced diagnostic capabilities which can send an alert to the operator when predictive maintenance is required.{/mprestriction}