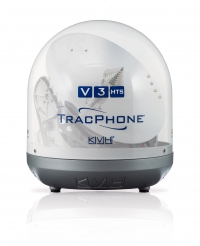 KVH has launched its latest small antenna system with the introduction of the 37cm TracPhone V3-HTS, a marine Ku-band VSAT antenna weighing 11kg.

This is the second HTS antenna design from KVH, which introduced the 60cm Ku-band TracPhone V7-HTS last year. Both antennas are manufactured by KVH at its headquarters in Middletown, Rhode Island, in the US.

“Ensuring that boaters and mariners around the world can experience the benefits of connectivity at sea has been a driving force for KVH for many years, and the new TracPhone V3-HTS makes that possible for more types of boats than ever before,” said Brent Bruun, KVH’s chief operating officer.

“KVH streamlines the entire process of getting broadband on the boat by offering monthly airtime and value-added services to create an end-to-end solution unmatched by other marine VSAT providers.”{/mprestriction}