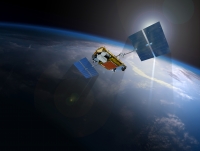 Iridium has completed the final launch in its NEXT programme, with all 75 planned satellites now deployed for its second generation L-band low Earth orbit (LEO) satellite network following a successful launch of the final 10 satellites in the series on a SpaceX Falcon 9 rocket from California.

{mprestriction ids="1,2"}Iridium has invested approximately $3 billion in replacing its original satellite system, which is comprised of six polar orbiting planes containing 11 crosslinked satellites per plane, for a total of 66 in the operational constellation.

The 10 Iridium NEXT satellites launched as part of this final mission with SpaceX were deployed to orbital plane three. Since the launches began the constellation has been undergoing a one-for-one replacement, new satellite for old, achieved through an in-space manoeuvre known as a ‘slot swap’.

“There are few words to describe what it feels like to complete a vision started many years ago when I joined the company and what it means for Iridium and our future,” said Iridium CEO Matt Desch.

“Our gratitude to SpaceX for helping bring this new generation of satellites to orbit, so flawlessly every time, is beyond words. However, for Iridium, we’re not quite across the finish line yet, as there is still some work to do to put these satellites into operation. Once that’s complete, our future will be in place. I’m just incredibly proud of our team right now.”

NEXT satellites already make up 60 of the 66 satellites currently in operation, with the final six scheduled for activation in the coming weeks following this latest launch. In total, 81 satellites are being built, with 75 launched. Nine will act as in-orbit spares and six will be ground spares.

The refreshed network will be used to provide new Iridium Certus services to the maritime market, with the standard product at launch set to offer 352 kbps bandwidth speeds over L-band. This will be upgradeable to 704 kbps by virtue of a firmware upgrade on the installed Certus antenna in the near future, Iridium says.{/mprestriction}