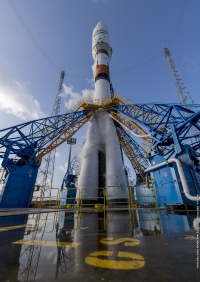 Communication company OneWeb has announced the successful launch of its first six broadband satellites on board a Soyuz launch vehicle from the Guiana Space Center in Kourou, French Guiana.

{mprestriction ids="1,2"}Lift-off of six OneWeb satellites occurred on February 27th at 21:37 pm UTC. The satellites separated from the rocket in two batches with signal acquisition confirmed for all satellites.

The launch marks the beginning of the largest satellite launch campaign and the transition from successful proof-of-concept to the commercialisation of OneWeb. Launching more than 30 satellites per rocket, OneWeb’s monthly launch program will grow its constellation to more than 650 satellites to allow customer demos in 2020 and provide full global commercial coverage by 2021.

The OneWeb network will provide a combination of high data throughput, low latency, true global coverage to the poles, and a range of user terminals for multiple markets. OneWeb’s satellites will communicate with Earth via the Ka and Ku spectrum bands. The Ka-band will be used for communication between the Ground Network (which connects the OneWeb system to the Internet) and the satellites; while the Ku band will be used for communication between the satellites and the user terminals that will deliver Internet connectivity to consumers.

OneWeb’s satellites are manufactured by OneWeb Satellites, a joint venture between OneWeb and Airbus Defence and Space.

OneWeb also announced the signing of its first two customers, providing service indirectly through reseller partners, or directly to the end customer.

Adrian Steckel, CEO of OneWeb, said: “This successful launch is a historic milestone for OneWeb, and marks the start of a new phase for our company as we begin scaling our satellite constellation in preparation to start full commercial services. I am also proud that we were able to announce the signing of our first two customers, demonstrating demand for OneWeb’s services.

Mr Steckel continued: “Our system will be able to offer significantly lower latency and faster speeds. We designed our system to create a coverage footprint over the entire planet – including previously unconnected rural areas, seas, and airspaces.

Our world is increasingly connected, and we do not want to leave anyone behind. Our constellation will level the playing field and connect the communities, areas, and industries that have until now been excluded from fast, reliable Internet access. What we are undertaking here is a project of ambitious scale, and I’m enormously proud of the team for getting us to this important milestone.”{/mprestriction}