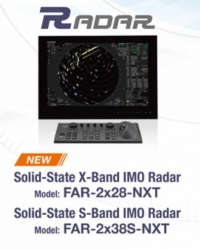 FURUNO has launched its NEW 800W IMO Solid-State device X-band Radar/Chart Radar and is offering a complete Magnetron-free Radar/Chart Radar Solution in both X-band and S-band with the addition of X-band models to the FAR-2xx8/3xx0 NXT Series from summer 2020.

{mprestriction ids="1,2"} The magnetron-free radar means less power consumption and no consumable parts, while maintaining the same level of performance.

Solid-State technology uses electronic components instead of a magnetron to generate microwaves. This technology consumes much less power, does not wear out and does not require any particular maintenance, significantly reducing operating costs. There is no pre-heating time and the start is faster than with a magnetron.

“As a leader in marine electronics, FURUNO is committed to providing ever more efficient tools to ensure safety at sea, while respecting the world’s environmental objectives,” stated FURNO in a press release.    {/mprestriction}