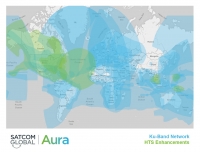 In addition to the latest HTS joining the Aura network, new spot beams have been illuminated on SES’s newest satellite, SES-12 HTS, to increase capacity for vessels sailing in popular shipping routes around the South China Sea, the Gulf of Thailand and waters around Papua New Guinea. Endorsed by some of the biggest names in shipping, the growing Aura network continues to evolve, supporting the developing needs of a wide variety of maritime customers.

SES-12 HTS, launched from Cape Canaveral in Florida by Space X, was added to the Aura network in March 2019, located at 95 degrees East, and now offers new spot beams which became available to Aura users in early 2020. {/mprestriction}