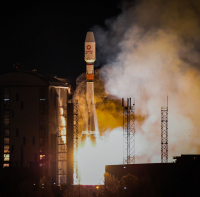 OneWeb has confirmed the successful launch of all 36 satellites from a Soyuz launch vehicle, which began flight from the Vostochny Cosmodrome. This brings the total in-orbit constellation to 110 satellites, part of OneWeb’s 648 LEO satellite fleet that will deliver high-speed, low-latency global connectivity.

Lift-off occurred on 18 December at 12:26 GMT. OneWeb’s satellites separated from the rocket and were dispensed in nine batches over a period of 3 hours 52 minutes with signal acquisition on all 36 satellites confirmed.

Less than a month since its acquisition by the UK Government and Bharti Global, OneWeb is returning to full operations with new hires and the restart of launches. OneWeb is continuing to build its ground station network, and pushing forward on user terminal development.

The success of this launch will put OneWeb on track to offer global services to customers starting with the United Kingdom, Alaska, Northern Europe, Greenland, Iceland, the Artic Seas, and Canada in 2021 with global service following in 2022.

Neil Masterson, OneWeb CEO commented: “It’s inspiring to be part of a fast-returning organisation refocused on our mission of bringing connectivity to everyone, everywhere. Each launch moves us closer to our goal of building this much needed global, secure, trusted, enterprise-grade broadband network, powered from space. We look forward to offering our commercial services to global users.”

UK business secretary Alok Sharma said: “With OneWeb’s latest satellites taking to the skies we come one step closer to connecting people across the globe with fast, UK-backed broadband and just months after British government investment made this possible.

The UK can be proud of being at the heart of the latest long-term advances in space technology.”

“Today’s launch is one of many steps we have taken to operationalise one of the world’s first LEO constellations which clearly demonstrates we are on our way to achieving our mission. Overall, there is an overwhelming demand for broadband and the pandemic has taxed infrastructure everywhere and many people worldwide are left with little to no options to access the internet. OneWeb’s system will help meet existing and future demand by delivering broadband connectivity to communities, towns, and regions left unconnected or under-connected.” said Sunil Bharti Mittal, founder and chairman of Bharti Enterprises.