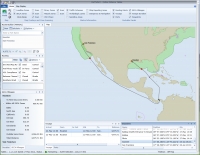 From 1 August 2012, for vessels operating within the North American ECA, the sulphur content of fuel oil used on board must not exceed 1.00 per cent.

“Our research has shown that it is rarely cost effective or practical to avoid these routes entirely,” said Captain Trevor Hall, director of AtoBviaC.

“It is, however, essential to accurately calculate in advance the impact on vessel operating costs and to identify where a slight adjustment of route will avoid unnecessary incursion into an ECA.”

“We have implemented SECA distance calculations into our distance table matrix from the time the various control areas came into effect, but with only a few weeks to go until implementation of the North American ECA, ship operators need to be aware they are on a countdown to unexpected costs if they do not make the correct provision for the additional fuel costs they will incur.”

The introduction of this new product also sees the launch of a new interface which uses Microsoft's Silverlight technology. Working on a Windows PC or an Apple Mac, it now incorporates a purchasing structure which enables the user to purchase a block of distances.

Also available is a route scanning function, which provides the user with distances within the various SECAs and ECAs and distances within Load Line Zones via marine information map overlays.

All voyage reports and maps can be saved and exported in PDF and spreadsheet formats.