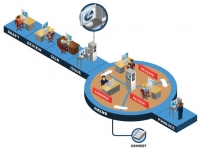 Electronic Shipping Solutions (ESS) announced that its CargoDocs solution, which offers electronic bills of lading (eB/Ls), has now entered the dry bulk market, with Cargill using the system for a grain shipment between the United States and Mexico.

Until that point, CargoDocs was only available in the energy and liner segments, and for barges in ARA region (Amsterdam, Rotterdam, Antwerp).

Cargill’s Reserve Terminal drafted the eB/Ls which were then reviewed on ESS’s eDocs Exchange by the carrier, UBC, in New York, by Cargill Inc., the shipper in Minneapolis, and by Cargill de Mexico, the receiver in Santa Fe Mexico City, before being signed electronically and issued to Cargill Inc.

All eB/Ls were produced back to the carrier within 19 minutes of issuance, reports ESS.

ESS explains that it collaborated with Cargill on developing agreed eDocs processes and worked with Mexican Customs to ensure the output was acceptable to them.

According to ESS, Cargill tested CargoDocs for Bulkers over two months before signing an operational pan-Group agreement.

The Minneapolis-based company has already commenced work to rollout CargoDocs across various tanker trades in Europe, agricultural cargo trade routes from North and South America to the Caribbean and Europe and petroleum barge trades in the Amsterdam-Rotterdam-Antwerp area.

Cargill is also preparing for a trial of CargoDocs for Liner later this year, adds ESS.

“The rapidly increasing adoption of CargoDocs for Tankers by major oil companies and large petroleum trading houses gave us the confidence that CargoDocs is the appropriate solution for Cargill to change from paper to electronic documents,” said Ernst Herger, global eB/Ls project manager of Cargill.

“After nearly 150 years of paper bills of ladings, this first electronic BL represents a historical milestone for us.”

Alexander Goulandris, chief executive officer of ESS, says he was pleased with his company’s transition into the bulker market.

“We are delighted to have been able to work with Cargill on successfully extending CargoDocs to cover dry bulk shipments, and look forward to working with them on their aggressive rollout plan,” he said.