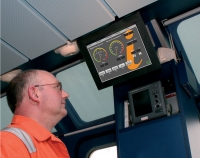 The AHTV (Anchor Handling Tug Supply Vessel) Maersk Logger has fitted a new system from Royston to monitor fuel consumption during all phases of its operation.

The 90-metre ship was built in 2009 under the Clean Design Class Notation, and since the vessel’s charterer is also the fuel owner they wanted a system for the continuous monitoring of its bunker consumption.

The Enginei system has now been installed for this purpose, and will enable the ship’s environmental impact and fuel consumption to be monitored more closely by the crew and by technical staff ashore.

Royston says that, by gaining a detailed understanding of how fuel consumption changes according to how the ship is being worked, fuel economies can be achieved by modifying patterns of engine use.

The Enginei system is linked to existing fuel flow meters that monitor the fuel being consumed by each of the Maersk Logger’s four main engines. With additional meters fitted on the auxiliary engines the system is able to provide a complete picture of how fuel is being consumed by the ship.

This information is presented on two separate touch screen displays located fore and aft on the bridge and on the ship’s PC in the engine control room.

The bridge displays enable the master to see how efficiently the engines are being used so he can make any adjustments that he considers appropriate. For example, the presentation shows the options available for running the engines more economically and with reduced CO2 output.

The system data is also relayed ashore where technical staff can view the same information, as well as a route projection on a Google Earth display that tracks the vessel’s movements and creates a graphical presentation of fuel consumption at all points along it.